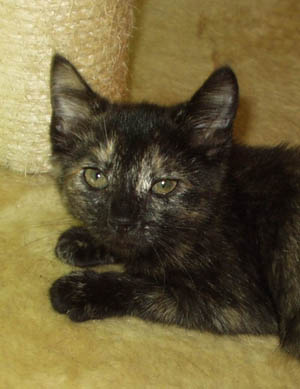 The Duchess was one of over a dozen cats and kittens who were dropped on someone’s doorstep in the middle of the night. This little tortoise shell kitten was different from the rest…she was born with no back feet. Something went wrong genetically for this girl. Her back legs formed and then just stopped at the ankles.

She was confused and shy the day we brought her here. But within a couple of days she was playing with other cats and with cat toys. If another cat hisses at her, she acts a little hurt, but then tries again to win them over. That seems to be her motto in life – to try, try again.

She observes everything. She watches the other cats; she watches us while we hold her. And she learns from everything she sees. She is able to move around and climb to the very top of cat furniture, which she mastered very quickly. It took her a bit longer to lose her shyness with us, though. It was a couple of weeks before she would purr for us, but now she won’t stop! She is the sweetest little snuggle-bug, and we think she deserves a chance at life.