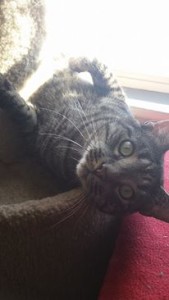 Sometimes we don’t know one of our rescues will be a “lifer.” We go in assuming we can get most back on their feet and adopted out. But occasionally there is more going on than meets the eye. Such was the case for Stallone.

His injuries were bad enough when we found in in a storm shelter, leg having been shattered by a car accident. It was touch and go, whether or not the leg could be saved, but in the end it was. What we didn’t know immediately was that the impact of the car on his body had caused internal damage to his liver, and that eventually he would need medication for the rest of his life to keep him healthy.

On his medication, you would not know that there is anything wrong with Stallone. The problem is that since his diagnosis, no one can tell us if he will last months or years. So we treat every day of his life as a blessing. He is a Holly’s Place “lifer,” and that is ok by us, and clearly by him as well.