Niamh was known to go to the side of ill animals. Even at the end, when she had a dozen health problems herself and was having difficulty getting around, she attached herself to our old dog Sasha. She had been a sort of “dorm mother” as well to some of the younger foster cats who would continually go to her for snuggles and a few head licks. She cuddled a sick little baby chick we attempted to save when he sought out her warm, soft belly to sleep against. After that, she kept a watchful eye on all of our baby chicks.

But she also had a thing for babies and children. She liked to “babysit” and supervise while Victoria babysat for Mara, one of our volunteer’s children. But her real passion seemed to be small babies. When volunteer Wendy first brought her newborn, Jonah, around, Niamh hopped up on Wendy’s lap and snuggled up against Jonah. At first, we thought she just really liked Wendy. But then it became clear, over time, that her true love was baby Jonah himself. She would lie next to him every chance she got, and knead her paws on his soft little belly.

Baby Girl (better known as Squirrel) came to us a dozen years ago, with little chance of surviving because she was so ill. It took round the clock care to pull her through, and she did end up with some permanent sinus damage from the terrible upper respiratory she had. Because of that damage, she was sniffly all the time, and no one wanted to adopt her. She became one of our sanctuary cats, who we knew just wasn’t going anywhere. Because of that, she never lived in a foster cat room – she lived among Victoria’s own cats.

What was amazing about Squirrel was her ability to know when anyone in the household had pain. When Rick had surgery, the minute we got home she attached herself to him and did not leave his side until he was healed. She did the same thing when Victoria had surgery. It became clear over the years that Squirrel’s calling was that of a nurse. 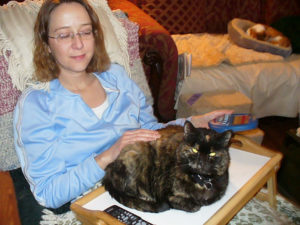 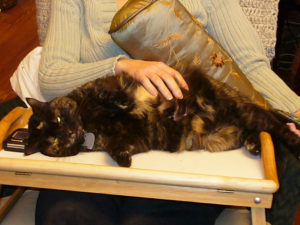 Baby Girl (BG) taking care of Victoria after a surgery. 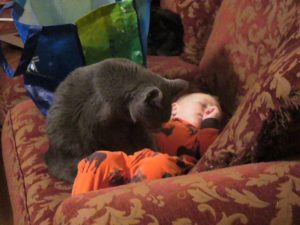 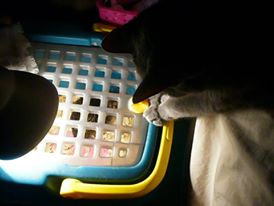 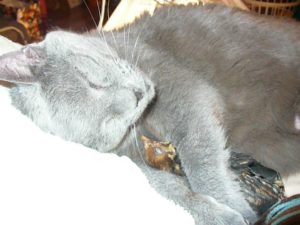 Niamh watching over a sick baby chick, both in his cage, and while in her arms.