Tush – The Toughest Cat in the World 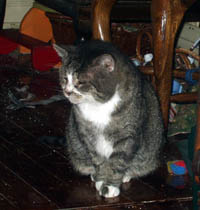 He has a 22 gauge bullet lodged in his right cheek, and part of his nose is gone where the bullet first hit him. He’s a little bit Clint Eastwood and a little bit Alan Alda – both tough and tender. He has battled two major viruses and kidney failure, and is still around to “tell” his story. He is a real inspiration, and his name is Tush Magoo, a name which calls for a bit of an explanation.

When he showed up at Alice’s house in Louisville, he was an impressive-looking stray tom-cat. But he was leery of the world, and walked with his tail down and rump sort of tucked in – which is where “Tush” comes from. And then the poor guy had these scarred, drippy eyes that were always “gooey” looking – which is where Alice got his second name, “Magoo.”

Tush would not approach humans, but Alice saw him often and knew he needed medical care. So she caught him one day, took him to the vet, and found out that in addition to his wounds he was positive for FIV (Feline Immunodeficiency Virus). That’s when she called us.

He had to have been close to ten years old when she brought him to us nearly five years ago. He wasn’t sure, back then, if he really wanted human attention. How things have changed! When we walk in the room now, even if he is in the screened outdoor room, he hears us and comes running inside for attention. When we sit down, he’s the first cat on the lap. And he is sweet and loving to the other FIV cats, despite having been such a tough-guy once (he lives with 7 other FIV cats).

Tush has lived some good years in “retirement.” Most of his life here has been a generally healthy one, despite the FIV. In fact, it was another virus, hemobartonella, that almost took his life when he was seriously ill. This is a tough virus to beat even for a young, healthy cat who is not immune-compromised. With Tush’s age and is FIV positive status, he was not expected to make it. But this cat has a strong will to live, and he beat the virus.

A bullet did not get him. Other animals who fought him and left him with scars did not get him. The hemobartonella virus could not get him, even in his old age. And we don’t think the FIV will take him from us either. Eventually, we will lose Tush, but it will probably be to old age and kidney failure – something that no one can stop. But he has cheated death many times, and I believe has gone way beyond his allotted “9 lives.” He’s just the toughest animal we’ve ever met. And he’s given us more than we can ever give back.
Tush passed away on August 19th, 2006, in the arms of those who loved him dearly.