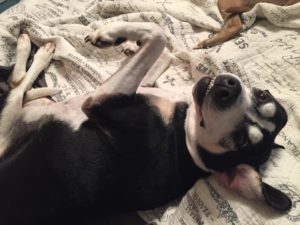 Beau is a mischievous hound. You can just look in his eyes and see that he is thinking about what he can get into – or out of – next. After Holly’s Place had him for awhile, we realized he could, and would, escape any yard within seconds of being let out the door. We agreed to foster him – temporarily of course – until he could find his forever home. His antics were not limited to escape. At adoption days he did not appreciate being in a crate, so he would express his displeasure by lifting his leg on the dogs in the cages next to him, as well as in the car on the way to and from adoption days. Despite the challenges Beaua presented us with, he managed to worm his way into our hearts and at some point we realized there was no point in taking him to adoption days, because we truly could not let him go. We had fallen in love with the “Beau-hound,” and he was ours to keep. Fast forward 5 years later and he is a 75 pound lap dog, just like he always wanted. He is never left outside in the backyard by himself because he wants to be with us, his people. There aren’t any cold lonely nights in a doghouse or scary days cowering from loud thunderstorms. He loves toys more than any dog I have ever come across. It doesn’t matter what kind of toy. He loves them all and will sometimes carry 2 or 3 around at a time. He loves food time and has learned to sit and wait patiently until I fill his bowl. He is definitely one of the sweetest, cuddliest, most lovable dogs you could imagine. He has found his forever home and it is right here with us!