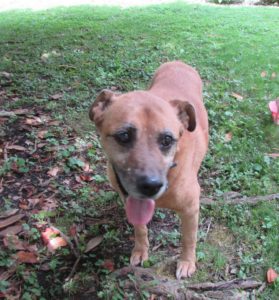 In September of 2005, my daughter and I decided to take 2 shelter dogs to a doggie pool party. On the day of the party, we were informed that some of the dogs at the shelter had parvo, so none of the dogs were allowed to leave. Holly’s Place had a couple of dogs that would enjoy a day out, so we picked up Houston and Duke and headed to Versailles.

It didn’t take long for me to fall in love with Duke. He was such a big baby. He refused to get in the water and spent a lot of his time sitting next to the life guard. We weren’t wanting another dog, as we already had two, but my husband and I decided to foster Duke until a forever home could be found for him.

Duke was adopted soon after he came to our house, but he came back to us after it was discovered he was placed in a potentially dangerous situation. Not long after, he was adopted by a family that loved him, but it didn’t work out with them, either. When Duke came back to us the second time, we decided we wouldn’t put him through going to a new home again, so he officially became a part of our family.

Giving Duke his forever home was a great decision for us. We love him. He is getting gray now and is slower to get up, even forcing us to bring his treats directly to him! But we don’t mind – he’s given us years of loyalty. His gentleness and adoration toward our granddaughter is precious. The way he howls when he hears a train whistle is so funny. “Du Boy” is such a special dog and I’m so glad he is ours!